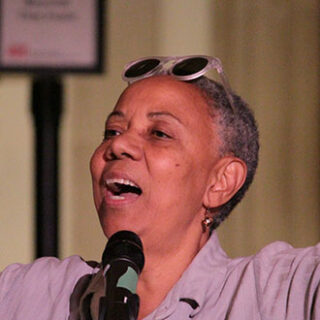 Considered a godmother of rap, hip-hop, dub and spoken word. Her work is used across the educational spectrum, encompassing alternate learning contexts from kindergarten to post graduate studies. As one of its lead originator and innovators, she has specialized in the writing and performing of dub poetry, a new genre of English Literature which is a highly politicized form of poetry, preferring a black aesthetic and specific cultural codification.

Allen is responsible for opening-up the form to insist and engrave feminist content and sensibilities. Renowned across the globe for her work, Allen has published several books and recordings, and has worked in poetry, fiction, non-fiction, writing for children, experimental writing forms, and has written several plays. Her work also appears in a variety of media. She has spent almost four decades writing, publishing, and performing her work in Canada, The US, Europe, and England and elsewhere.

Recently awarded an Honourary Doctor of Letters from Wilfred Laurier University, Lillian Allen is a Creative Writing Professor at the Ontario College of Art & Design University in Toronto Canada. Allen emerged from the grassroots in the seventies to become a leading influential figure on the Canadian cultural landscape.

Allen is a leading expert on cultural diversity and culture in Canada and has been a consultant and advisor to all levels of government, to several leading Canadian institutions, and to community groups. She has initiated, designed and facilitated the establishment of a number of organizations in various culturally diverse communities, and has worked within several established organizations to implement strategies to create access and change. Lillian also initiated such programs as the legendary Fresh Arts and the International Spoken Word Program at Banff Center for the Arts. Multi-talented and multi-dimensional, she instigated, co-produced and hosted CBC’s (Canadian Broadcasting Corporation’s) Wordbeat, a national weekly radio show on poetry and the spoken word.