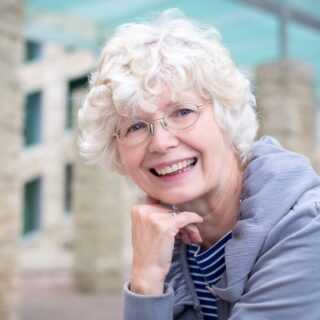 Alice Major’s most recent book, Welcome to the Anthropocene, continues her long engagement with science and mathematics. With her customary wit and intelligence, she tackles the urgent questions raised by human activity on the planet.

How do we get along in this complicated period when it can hard to figure out how to do much about the big stuff in our small way? When we have to make a living? When other animals have to live with us? And when poets have to work with the same brains as every other human to make meaning out of it all?

Alice has published ten previous collections of poetry and the essay collection, Intersecting Sets: A Poet Looks at Science. Her many awards include the Pat Lowther Award (for best book of poetry by a Canadian woman), and a National Magazine Award Gold Medal. As well as reading her work across Canada and in the U.S. and Britain, she has been an invited speaker at science and math gatherings.

Alice founded the Edmonton Poetry Festival in 2006 while serving as Edmonton’s first poet laureate. She has been president of the Writers Guild of Alberta and the League of Canadian Poets, and chair of the Edmonton Arts Council. She received the 2017 Lieutenant Governor of Alberta Distinguished Artist Award.