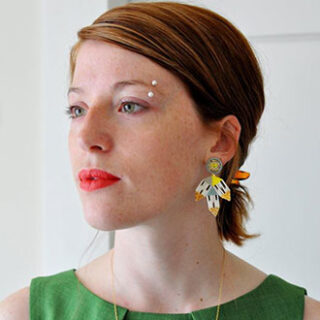 Winona Linn is a poet, visual artist, performer, teacher and spoken word artist. Originally from Kingston, Ontario, Linn made a name for herself in the thriving poetry community of Halifax, Nova Scotia while attending the University of King’s College. In only her second year at school, she slammed for and won a spot on the two-time champion Hali Slam team and competed on a national level at the Canadian Festival of Spoken Word.

Linn was the 2011 poet laureate of the Federal Green Party of Canada, and wrote and performed poems on a variety of issues for the duration of the 2011 election. Her poem “Leave,” quickly gained popularity on Youtube and has been featured in articles on the CBC and CTV websites, as well as many other online news sources.

Linn’s most recent work, The Truth About Rabbits, was published in the spring of 2015 as a joint project between Thee Hellbox Press and Greyweathers Press. This was a joyful collaboration between Linn and two letterpress studios, and resulted in a limited-edition hand-bound rare book, with Linn’s poetry set one letter at a time by Hugh Barclay of Thee Hellbox Press, and interspersed with the evocative and charming wood engraving illustrations of Greyweathers Press’ Larry Thompson. It is available for sale at two of Paris’ well-known English bookstores: Shakespeare and Company, and Abbey Books.

Currently, Linn lives in Paris, France. She is a regular writer and feature performer in the Paris literary and spoken word scenes, and is in the process of publishing her third book, a graphic novel.”