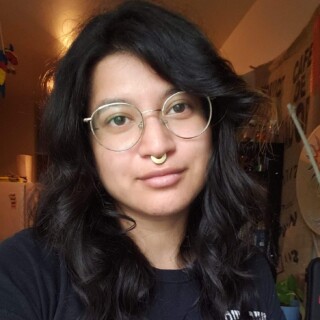 V. Guzman, V, B , AUNTE V is a disabled Non Binary Salvadoran Canadian artist, visionary and organizer, a child of war refugees born and raised in Edmonton Alberta, Treaty 6 Territory . They are known as powerful, scary and intimidating organizer, they were a respected local visual artist in the last decades , specializing in acrylics for Nextfest, their last solo show was back in 2017 at the Aviary. In 2014, V got suckered into performing spoken word poetry and regretted ever since. They don’t call themselves a poet per-say, nor an MC but identify more so as a writer. Their bars are known for its lyricism, melodic rhymes, leaves you breathless sometimes shook. They sometimes write poetry , mostly for for themselves, sometimes for their friends and sometimes for enemies.