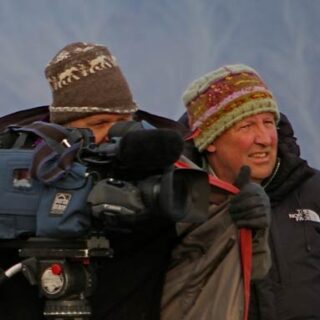 Two time Gemini winner, Tom Radford’s career spans forty years in the Canadian television and film industries as a Writer, Director, and Producer. Born to a Pulitzer Prize-winning newspaper family that came to Alberta in 1905, Tom has carried on a tradition of portraying the distinctive character of the west and north to Canada and the world. His film I, Nuligak documented/recreated the writing of the first Inuit history of the north. Preservation of language was very important to the writer, Nuligak, and thus to the film.

When Codebreakers was named best Science and Adventure Documentary at the 2011 Geminis, it marked the tenth time Radford’s films have won national or international honours. He has won the Best Director prize at the Alberta Film Awards on eight separate occasions, most recently in 2011 for Tipping Point, The Age of the Oil Sands, he and Niobe Thompson’s two hour investigation into the environmental impact of the Athabasca oil sands. His films have won honours from the World Television Festival in Banff to San Francisco, Ohio, Yorkton, San Antonio, and Florence, leading to the Alberta Award of Excellence presented by Peter Lougheed.