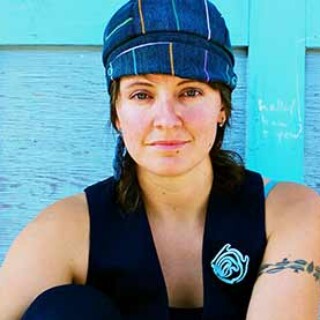 Tanya Davis is wrapping up her term as poet laureate for Halifax. Poet, storyteller, musician and singer-songwriter, she fuses these elements together in a refreshing matrimony of language and sound, side-stepping genre and captivating audiences in the process.

Tanya has been performing as a poet since 2000, shortly after seeing her first spoken word performance in downtown Vancouver, in an art space aptly named ‘The Church of Pointless Hysteria’. Since then, she has picked up multiple award nominations, including one for her sophomore release, Gorgeous Morning (for the 2009 ECMA Female Recording of the Year). She is a two-time winner in the CBC National Poetry Face-off as well as the Canadian Winner of the 2008 Mountain Stage NewSong contest.

In 2009, with support from Bravo, she collaborated with independent filmmaker Andrea Dorfman to produce a short videopoem entitled How to Be Alone; the short has since been featured at numerous film festivals, including The Vancouver Film Fest, The Worldwide Short Film Festival, and the VideoPoetry Festival (Berlin). It also has 1.8 million views on Youtube.

She also recently completed a feature-length show based in music and performance poetry, as funded by The Canada Council for the Arts; it debuted in 2011. Her first book , At First, Lonely, was published in June 2011 by Acorn Press.