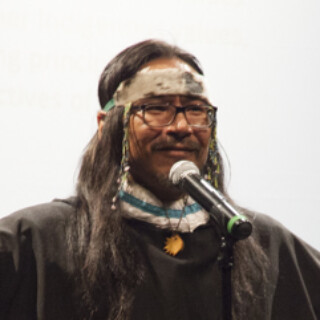 Stan Nochasak is forty-five years old and originally from Nain, Nunatsiavut (“Our Beautiful Land” in Inuktitut, located in northern Labrador) , but currently lives in St. John’s since 1994. There, he initially attended Memorial University of Newfoundland, and is now enrolled in the Faculty of Education, in a special five-year program titled, “Native and Northern,” studying (though currently on hiatus) to become a primary school teacher. He is a visual artist who works in drawing, painting, writing, poetry, traditional Inuit drum dancing, storytelling, acting, and motivational speaking. His parents Eva and Paul live in Nain, he has three brothers and five sisters, and is an uncle twenty times over (all of whom he greatly loves). He has acted in five documentary films— including The Nature of Things with David Suzuki— Republic of Doyle, Frontier, Hudson and Rex, and an adaptation of William Shakespeare’s play, The Tempest, directed by Jean Lambermont-Morey, as a Beothuk.