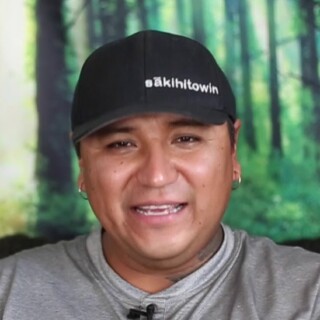 tānisi kahkiyaw! Randy Morin nitisihkāson is from the Big River First Nation, Treaty 6, located in central Saskatchewan. He currently lives in Saskatoon with his partner Lindsay Knight (also known as Eekwol) and two children, Keesik (11) and Kisay (7). He also has a twenty-two-year-old daughter who lives in Prince Albert with her partner. His western education consists of a Bachelor of Arts in Indigenous Studies from the University of Regina, a Bachelor of Education from the University of Saskatchewan, and a Master’s Degree from the University of Victoria in Indigenous Language Revitalization. His Cree education systems consist of having a lifetime of traditional Plains Cree teachings. He is an oskāpēwis (helper) for many people in and around the community. He believes in living a healthy lifestyle in order to be a role model for youth, as well as a strong supporter of maintaining and teaching his Cree language and culture. He shares this knowledge and teachings at the University of Saskatchewan, where he currently works as a lecturer. He thanks his grandparents and parents for teaching him the Cree language, and he thanks all that he meets that continues to teach him about his culture. He has been a Storyteller and a language and culture activist for many years—some say since he was able to walk and speak. He is also an author of two Cree children’s books, with more books to be published in the future. He has worked in many Cree animation projects with APTN and Blue Hills Productions over the years, including Wapos Bay and Guardians Evolution. His passion is teaching and sharing the beauty of the Cree/nēhiyaw language and culture in fun, creative, ways. ēkosi pitama. kinānāskomitināwāw, hiy hiy.