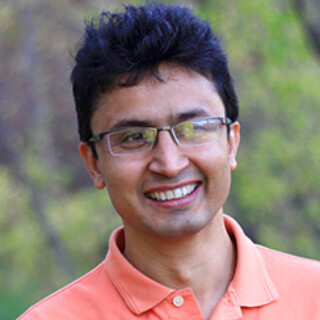 Pushpa Raj Acharya is a writer, who now lives in Edmonton, Canada. He is a member of the “Borderlines Writers Circle/ Writer-in-Exile Programme” for 2013-14. He writes poetry in English and Nepali; his poems are published in Canada, Japan, India, Bangladesh, Pakistan, and Nepal. He has published two poetry books: Dream Catcher (2012) and Chayakal (2006). Chayakal, or “the Phantom Time” is a long Nepali poem that explores human conditions, emotions, and relevance of myths during the Nepalese civil war. Dream Catcher comprises of poems on pervasiveness of nature, explorations of the inner self, human connection with place, and ways of interpreting the world. From 1999 onward, Pushpa was part of a project called “Conservation Poetry Movement,” in which poets travelled to villages across Nepal and wrote and read poems with the villagers. Pushpa, along with performance artists, has performed poems in the ancient streets of the Kathmandu valley. As a translator, he has translated several poems and plays. Currently, he is a PhD candidate in Comparative Literature at the University of Alberta.