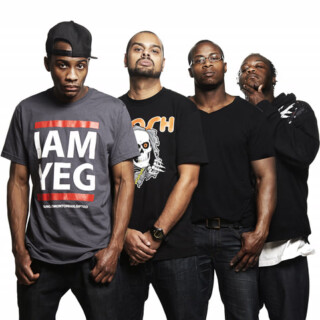 Considered by Dose Magazine to be “one of Canada’s most underrated hip-hop groups”, the Politic Live trio has been twice nominated for the Western Canadian Music Awards.

Fusing their West Indian roots with past and modern day hip-hop influences, Politic Live diversifies the genre of hip-hop. They can hold their own in a fight of wits amongst MCs, but their lyrics also show a social conscience reminiscent of Public Enemy.

Politic Live have opened for the likes of Nas, K-Os, and Saul Williams; have had videos on Much Music; been showcased at national and regional music industry events. They are also the producers, organizers, and hosts of Edmonton’s Hip-Hop For Hunger, an annual Christmas initiative that in 8 years has raised over 6,000 lbs of food for the Edmonton Food Bank.

At the Edmonton Poetry Festival they are taking part in Hip-Hop Heart. Beat. For more information: www.PoliticLive.com