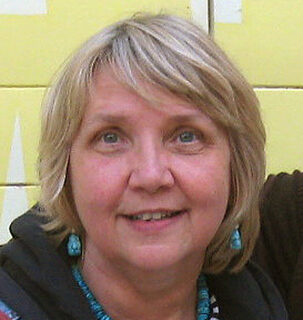 Nancy Mattson moved from Edmonton, Alberta, to London, England, in 1990. She has published three full poetry collections, one in Canada and two in England. Her first, Maria Breaks Her Silence (Coteau, 1989), based on the life of a 19th century Finnish woman immigrant to Canada, was shortlisted for the Gerald Lampert Award and adapted by Alison Wells for the Edmonton Fringe Festival as Lye Soap and Dancing Cows.

Her second collection is +Writing with Mercury (Flambard, 2006) and she is one of five poets chosen for Take Five 06 (Shoestring, 2006). Her poems in these two volumes are set in contemporary England, Canada, Finland and Italy and use memory, myth, history and family stories to create a rich linguistic and cultural texture.

Nancy’s latest collection is Finns and Amazons (Arrowhead Press, 2012). It begins with poems about some Russian women artists of the avant-garde but returns to the theme of family history, inspired by letters sent by her great-aunt Lisi from Soviet Karelia in the 1930s. The letters themselves have also been published in a pamphlet, Lines from Karelia (Arrowhead, 2011). Some of the poems from Finns and Amazons were drafted during a fellowship at Hawthornden Castle in Scotland in June 2007.

Nancy has read her poetry at venues, festivals and universities in Canada, the US, the UK, Finland, Russia and New Zealand. She is married to poet and mathematician Michael Bartholomew-Biggs and together they organise the popular Poetry in the Crypt reading series at St Mary Islington in north London.