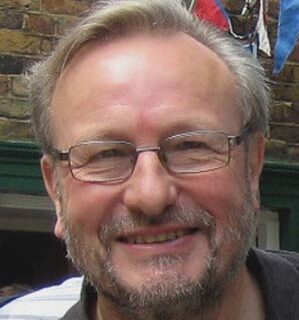 Michael Bartholomew-Biggs grew up near London’s Heathrow Airport. A youthful aptitude for sums and symbolic manipulation caused him to embark on a mathematical career, first in the aircraft industry and then in higher education and research. He retired from full-time academic life in 2008 and is now Reader Emeritus in Computational Mathematics at the University of Hertfordshire.

He began writing poetry in the late 1980’s and his work has been widely published in magazines and anthologies. His first chapbook, Anglicized by Common Use, appeared in 1998 and was followed by Inklings of Complicity (2003) and Uneasy Relations (2007) in which the two halves of his brain cooperate to produce poems which link mathematical ideas with subjects as diverse as hill-walking, portfolio theory, sexual politics and the works of Edgar Allan Poe.

His first full collection Tell it Like it Might Be (2008) searches for “what really happened” behind familiar stories such as lovers’ protestations, government statements or the Christian gospels. His latest book is Tradesman’s Exit (2009) which mixes elegy with personal recollection to test the links between who we are, what we do and how we might be remembered. His next book, due from Shoestring Press in summer 2013, is a narrative sequence set in the world of aviation in the 1920s and 30s. He is also working on an “evolution myth” based on paintings by the Australian artist David Walsh.

Although he is still involved in mathematical research, he now spends most of his time writing, reviewing and editing. He is poetry editor of the on-line magazine London Grip and, with his wife, the poet Nancy Mattson, he helps to run the Poetry in the Crypt reading series at St Mary’s Church in Islington.