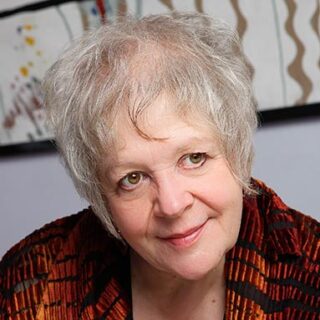 Liz Lochhead was appointed Scots Makar – the National Poet for Scotland – in 2011, after serving as the Poet Laureate for Glasgow. A poet and playwright, she is described as “both transgressive and popular.” The female voices that she creates in her monologues and many of her poems draw on a Scottish oral tradition that goes right back to the ballads, is subverted by the music-hall, and takes pleasure in a distinctive West of Scotland tradition of storytelling and humour.

She began her writing career whilst working as an art teacher in Glasgow. Her first collection of poems, Memo for Spring, won a Scottish Arts Council Book Award which turned out to be the first of many awards she would earn throughout her career. Since then, poetry has been published in a number of collections including Penguin Modern Poets 4 and, most recently, her selected poems, A Choosing.

Her plays include an adaptation of Moliere’s Tartuffe, Mary Queen of Scots Got her Head Chopped Off and Medea. Liz has worked as Writer in Residence at both Edinburgh University and the Royal Shakespeare Company.

She first came to Canada in 1978, after being selected for the first Scottish-Canadian Writers Exchange Fellowship.