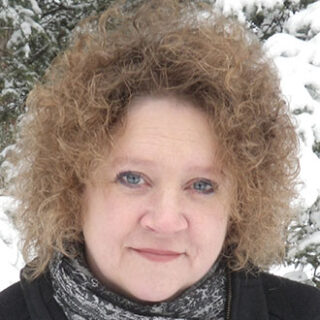 Nuala: a fable is Kimmy Beach’s sixth book. Her second, Alarum Within: theatre poems (Turnstone Press, 2003), has been adapted twice as a stage play. The Last Temptation of Bond (UAP, 2013) was featured on CBC’s The Next Chapter with Shelagh Rogers, and was chosen as one of the top five books of the year at Quill & Quire’s Readers’ Poll. Kimmy has served as a mentor, teacher, workshop facilitator, and writer-in-residence for over a dozen provincial and national writing organizations and schools. She is currently writing a novel about 1970s romance comics and the music of Tom Jones. Kimmy lives in a creaky old house in Red Deer, Alberta, with Stu, her husband of thirty years.