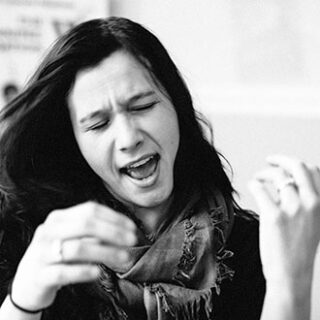 Katherena Vermette is a Métis writer of poetry, fiction and children’s literature. Her first book, North End Love Songs (The Muses’ Company) won the 2013 Governor General Literary Award for Poetry and was the 2015 selection for On the Same Page, Manitoba’s Book Club. Her work has appeared in literary magazines and anthologies across the globe. Vermette lives, works and plays in Winnipeg, Manitoba, Canada.

In 2015, Portage and Main Press published her seven volume picture book series, The Seven Teachings Stories. This year, she is releasing a National Film Board short documentary, this river, and a novel, The Break (House of Anansi 2016).

She has been a proud member of the Indigenous Writers Collective since 2004, and holds a Master of Fine Arts from the University of British Columbia. When not being writerly, she coordinates arts programs in Winnipeg, and lives with her family in a cranky old house within skipping distance of the temperamental Red River.