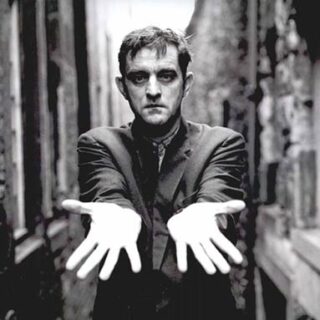 Jem Rolls has never published anything. He believes performance poetry to be the most direct and dynamic medium full of as yet unrealised possibilities

From 1993 he found himself ineluctably sucked into performing, doing 150 shows a year while learning fast on his feet and running Big Word. This now legendary weekly cabaret in North London ran under the tagline This is not books this is raw word, and featured many of that unparalleled generation of diverse performers.

From 1996 Jem ran the only successful poetry cabaret in Edinburgh in decades and in 2001 he moved there and set up a very successful fortnightly cabaret, while running Scotland’s first Poetry Slams.

In 2001 he did the Toronto fringe and nothing was ever the same again. Confronted by the possibilities and demands of the hour show, Jem gleefully exploded into the freedom of it. The Fringe circuit has very few rules and can provide the artists a complete liberation. Jem has been making a living creating a new hour show every year since 2003.

“By taking poetry out of the dour church halls and into the pubs and comedy circuit, Rolls and Govan kick-started an interest in poetry not seen since the days of Hugh MacDiarmid and Dylan Thomas.” Scotland On Sunday, 2003

“The love child of Eminem and John Cleese” Montreal Hour