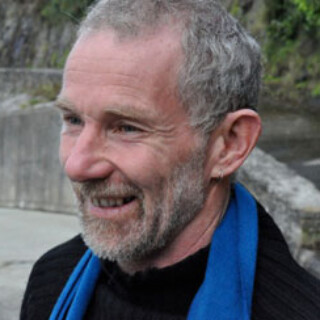 Ian Stephen was born in Stornoway, Isle of Lewis and lives there still. A former Coastguard, Ian has worked full-time as a writer, artist and sailor since winning the inaugural Robert Louis Stevenson Award in 1995. He received a major Creative Scotland Award to navigate the settings of traditional stories. This remains his working practice.

Ian was the first artist in residence at StAnza poetry festival in 2004. He appeared at Ledbury Poetry Festival in 2013. In 2014 he will be representing Scotland in Canada, a Commonwealth Poets United event arranged by The Scottish Poetry Library. His sequence of lyrics, celebrating the archipelago of St Kilda, along with the music of David P Graham, was published by Inventio-Musikverlag, Berlin, in 2013. A new sequence of maritime poems, including a group composed during the Cape Farewell Scottish Islands voyages was selected for the 2013 Oxford Poets international anthology. One of these was selected for the Scottish Poetry Library’s ’20 best Scottish poems of 2013’.

His re-telling of Western Isles Folk Tales will be published by The History Press this year and his first novel, A Merry Book of Death and Fish has been accepted by Saraband, Glasgow. Ian has contributed poetry, short fiction and images to many periodicals in the UK and abroad, including Edinburgh Review, Stand, The London Magazine, Poetry Australia. Poetry Canada Review, Waves (Ontario), event and West Coast Lines (BC).