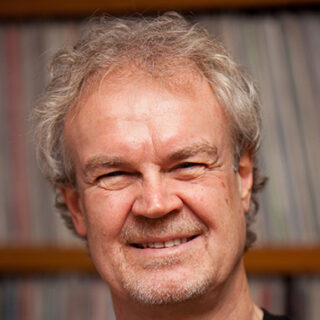 Holger Petersen has been a record producer, broadcaster, music industry board member, album collector, and serious music fan for over three decades.

He is the founder of Stony Plain Records in Edmonton, which now in its 38th year, has won ten Juno awards and been nominated for four Grammy Awards. Stony Plain was the Independent Record Label of the Year for eight years at the CCMA’s and six years at the Prairie Music Awards. Stony Plain artists, past and present include Ian Tyson, Corb Lund, MonkeyJunk, Maria Muldaur, Kenny ‘Blues Boss’ Wayne, Long John Baldry, Jeff Healey, Duke Robillard, Tim Hus and many others.

Holger is also a Founder and past Artistic Director for The Edmonton Folk Music Festival. He continues to host two blues radio shows (Saturday Night Blues on CBC Radio and Natch’l Blues on CKUA). He is the recipient of two honorary “Doctor of Letters” Degrees, presented to him by the University Of Athabasca and the University of Alberta in recognition of his contributions to Canadian Culture and Public Broadcasting In 2008 he was presented with a Keeping the Blues Alive award in Memphis for his radio work. Holger has also been named to the Order of Canada.