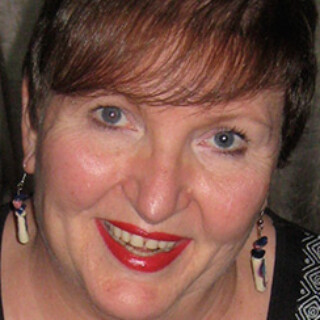 Deborah Lawson is an Edmonton-based freelance editor and writer. She’s been writing poetry for many years, and in 2003 she began to take part in Edmonton’s vibrant poetry community and work with some of this city’s many noted poets. She began with observation and listening, then moved on to honing her work through workshopping and public performance. In 2013, Frontenac House published her début collection, Reckless Toward Blossoming. Several literary magazines and anthologies have also published her work, including Other Voices magazine, which awarded Deborah its 20th anniversary Poetry Grand Prize for her poem Dead Nun’s Underwear.

When not working or writing poetry, she sings with the Richard Eaton Singers, volunteers for writing-related organizations and works in her garden.

Deborah is the mother of three adult children—a daughter and two sons—and is “Moogie” to an amazing grandson whose birth she was honoured to attend in 2013.

Her idea of perfection is a poet in a canoe. Her idea of profound has yet to be adequately defined. But through poetry, she’s beginning to discern how the profound encompasses both the mundane and the glorious.